Local Hope, founded and still known today in Guatemala as Xela AID (Agency for Integrated Development, pronounced “Shay-la”) is a not-for-profit organization that provides a range of important services to largely indigenous populations in poverty belts in Guatemala. We team locally and with organizations abroad who share values consistent with our mission to enable those who are critically underserved to become healthy, educated and self-reliant so they can beat poverty and thrive.

The organization was founded in 1992 by Leslie Baer Dinkel, then a young professional who’d gone to Guatemala to improve her Spanish. Finding herself in the middle of a decades-long Civil War that was still raging, she came upon widespread suffering in rural communities where access to clean water, health care, and education were the exception. She quickly became drawn to a humanitarian mission, and upon her return to the states, turned for help to friend Fr. Peter Hickman, founder of a forward-thinking ecumenical spiritual and service community. 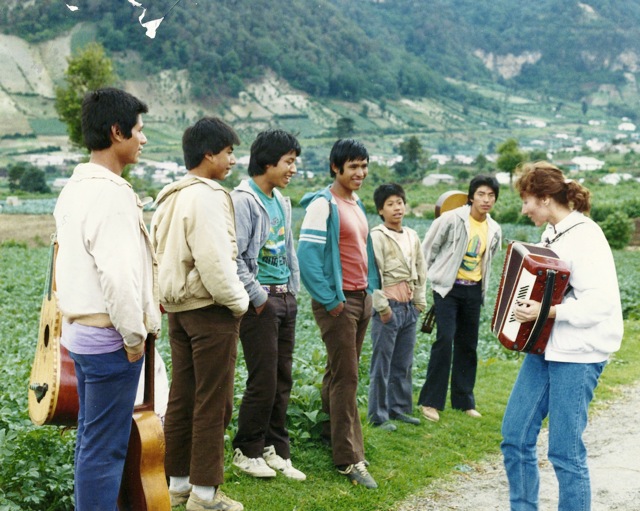 With Hickman's support, the first volunteer service trip was scheduled for June of 1993 and Xela AID was born. Early projects included emergency medical aid and the building of a school. A full account of the founding of the project and associated adventures and misadventures can be read in Hope Dancing: Finding Purpose and a Place to Serve, Leslie’s memoir published in 2019. 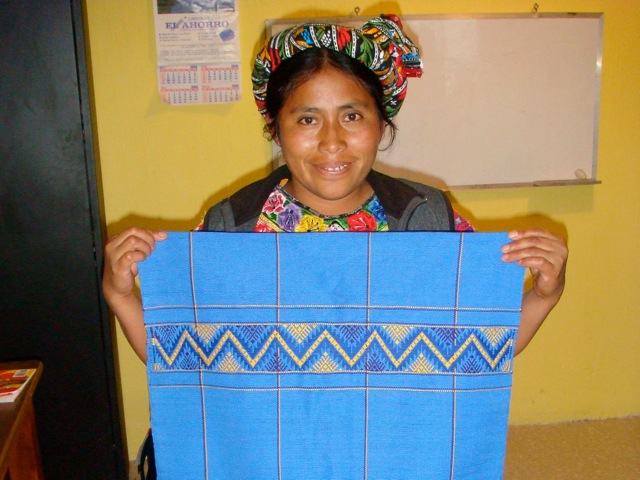 In its early days, Xela AID focused on emergency medical aid. With the good counsel of the Peace Corps and local development organizations—as well as from lessons learned as first-hand witness to "give-aways" eroding dignity and creating dependency—the organization quickly adopted an approach of "integrated community development" to address a range of issues that together thwarted health and prosperity. Leadership recognized education as key to overcoming poverty and creating abundance, and by the late 1990s, the lion's share of Xela AID's efforts had evolved to focus on removing obstacles to education and to promoting self-reliance.

Today’s Local Hope understands that children who are hungry or sick cannot learn, and that families who have insufficient income cannot support their children being in school. Therefore, the organization supports education while it works simultaneously to provide the tools, services and access needed by the local population to overcome health and socio-economic issues that thwart learning.

Since 2002, with the support of thousands of individual donors and dozens of foundations and organizations that provide medical and other materials and low- or no-cost, Local Hope has delivered in excess of $8 million of support in these areas: Education, Health, Small Business Development/Micro-Finance, Clean Environment Initiatives and Emergency Relief. We seek out partnerships with individuals, families, local government, and other non-profit organizations to address challenges holistically. This formula has made the organization unique in some aspects and has fueled its many successes.

Learn about Who We Are HERE.

Above left: A local weaver displays here wares. Microbusinesses such as that supported by Xela AID through its Tesoros del Corazon Weavers Cooperative help remove economic obstacles to learning and give parents a way to support their families.

1992
• Founding - Xela AID is founded during the Guatemalan Civil War on December 15th.

1993
• First Volunteer Service Trips – In July and December, Xela AID undertakes its first two volunteer trips Organized with the help of a local language school, the group holds medical and optical clinics and builds a small home for a family living in extreme poverty. Yearly volunteer trips continue through present.

1996
• Women’s Gathering Place - Xela AID constructs a round building designed by then-Board Member Wolfram Alderson. The unique structure is initially used as gathering place for women and as a weaving cooperative.

• In History: Signing of the Peace Accords - Peace Accords are signed by the Guatemalan government and the revolutionary forces after a civil war that lasted more than three decades and during which at least 300,000 people were killed or “disappeared”—an estimated 90% of which were rural Maya such as those served by Xela AID. The conditions of poverty and unequal opportunity that fueled the war remain largely unchanged.

1998
• In History: “Never More,” and Murder - Roman Catholic Archbishop and human rights defender Juan José Gerardi Conedera releases the report “Nunca Más” (Never More) which includes interviews with more than a thousand survivors and witnesses to attrocities committed almost exclusively by the Guatemalan military. It is the first investigation to include the names of the implicated individuals, totaling more than 1,000. Two days after presenting the report, the Archbishop is murdered in home in Guatemala City.

• In History: Truth Commission Report - After interviewing 11,000 people and pouring through declassified information from the U.S. government, the Guatemalan Truth Commission completes its final report, “Guatemala: Memory of Silence.” The report states that “agents of the state committed acts of genocide against groups of Mayan people… State forces and related paramilitary groups were responsible for 93% of the violations documented… Insurgent actions produced 3% of the human rights violations and acts of violence.” The total number of people killed was more than 200,000; 83% of the victims were Mayan and 17% were Ladino. Subsequent to the Commission’s work, a "Diario militar" (military logbook) was found that had registered the names and data of persons unlawfully arrested, tortured, and put to death by a unit of the government security forces. The Forensic Anthropological Foundation of Guatemala (FAFG) continues to exhume mass graves contributing valuable information for further investigations.

2002
• Preschool Launched - Xela AID enters into a partnership with SOSEP, the project of the First Lady of Guatemala and converts its round weaving cooperative to San Martín Tots Preschool. This is made possible by a donation from Milton and Helen Dinkel that funds the building of a kitchen at the round house. The preschool initially serves 30 children, but quickly grows to nearly 60.

2004
• Headquarters Inaugurated – Xela AID’s first headquarters, is completed. An inauguration is held including local political and religious officials, a volunteer group, and many local citizens. Mám children are featured dancing during the ceremony.

2005
• Loblatzán Expanded - Xela AID adds a second floor to the School at Loblatzán made possible by a donation from then-Board Member Dr. Flora Johnson. The new classroom increases the schools capacity from 70 children in two shifts to 140.

• First Official Board Chair - Entrepreneur Susan Rikalo becomes first Chair of the Board of the newly-minted Xela AID 501 (c) (3).

• Women’s Literacy Program Formalized - Board Members Sherry Robin and Bailey Smith become Coaches and shore up the Xela AID’s fledgling Women’s Literacy Program, positioning it for expansion. It is led locally by Alicia De León, a graduate of our Work Study Scholarship Program and one of the village’s first college graduates. Colleen Dodds establishes the Karen E. Edwards Women’s Empowerment Program Fund to further strengthen and grow the program.

• In History: Guilty of Genocide - A court in Guatemala finds former military leader Efrain Rios Montt guilty of genocide and crimes against humanity. From a BBC report: “The three-judge tribunal sentenced the 86-year-old to 80 years in prison. Montt was convicted of ordering the deaths of 1,771 people of the Ixil Maya ethnic group during his time in office in 1982 and 1983. Survivors described horrific abuses committed by the army against those suspected of aiding left-wing rebels. In blisteringly critical language, Judge Jazmin Barrios said that as de facto president it was logical that Rios Montt knew of what was happening in the country, but did nothing to stop it. Hunger, systematic rape and forced displacements were all used as tools of war against the Ixil people…” It is the first time a former head of state is found guilty of genocide by a court their own country.

2014
• First Foundation Grant – The SG Foundation awards Xela AID its first foundation grant under the purview and with the assistance of long-time SG staff member Dee Reed and Executive Director Pamela Gratten. A second grant comes from the Arthur B. Schulz Foundation. Numerous grants follow. Foundation grants augment personal gifts to enable the organization to professionalize and expand services, and this year, serves nearly 6,000 people through all programs.

• Welcome Center Added - A sorely needed third floor is added to Xela AID headquarters, and inaugurated as The Betty Rikalo Welcome Center. It is made possible by a capstone gift from Dolores Tusich secured by Sue Rikalo on behalf of the Tusich and Rikalo family estates.

2016
• Expanding: A Second Capital Campaign - Xela AID launches a campaign to build the Center for Learning Innovation, a second three-story building which will encompass 16,000 square feet and will double the organization’s capacity to serve.

• Commitment to Sustainability - Xela AID’s Board ratifies a resolution to use only cutting-edge, sustainable energy technologies and to become a model for sustainable community development that can be replicated and scaled in other areas of Guatemala and beyond.

• First Six-Figure Grant - The SG Foundation contributes a $100,000 matching gift to Xela AID’s Center for Learning Innovation, becoming the first six-figure grant awarded directly to the organization and the second under it’s management.

2018
• Name Change – The organization’s name is changed in the U.S to Local Hope, with Xela AID—well-known and understood in Guatemala—continuing in use there.

***
The three-story Center for Learning Innovation, under construction, is located behind current headquarters. The new building will include a Montessori preschool for 100 children including children with special needs. It will expand learning facilities and include a state-of-the-art computer laboratory, and a 12-room Eco-Lodge@Xela AID. The facility will become a source of sustainable income for Local Hope projects and many of the operations in Guatemala and will model sustainable energy practices. It will bring two dozen additional jobs into the community and provide for a sustainable source of income for Local Hope to continue to serve in perpetuity under local supervision—the best outcome we could hope for.

And the journey continues…